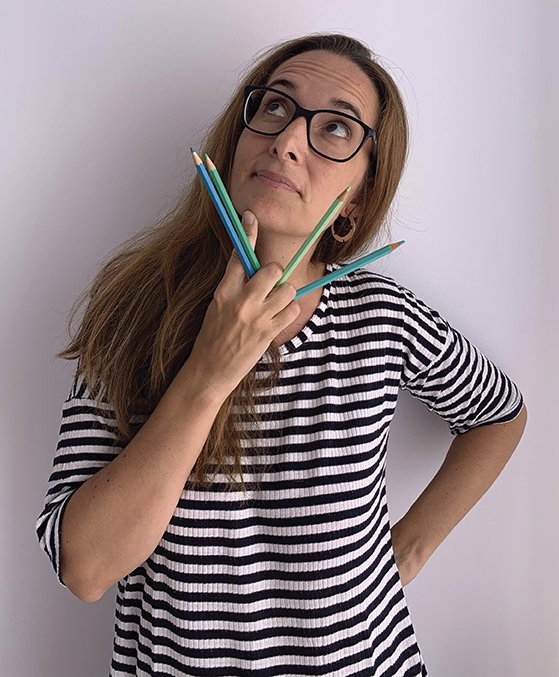 I was born and raised in Badalona, and from a very young age I wanted to be a storyteller. Over the years, those crazy dreams as a little girl took shape. In the beginning, anything that caught my eyes ran the risk of ending up drawn on a sheet of paper. Later, thanks to my education in Fine Arts at the University of Barcelona, specializing in drawing and engraving, I discovered and learned new resources and techniques that allowed me to improve my illustrations and make them grow plastically.

After graduating, I joined Pau Gargallo School of Art to learn illustration. But that was not enough… (probably because I never have enough of anything!) and I expanded my professional horizons through graphic design and also graduated in advertising graphics. At EINA, the University Center for Design and Art in Barcelona, I took a Postgraduate Degree in Illustration and Press. I studied screen printing workshops at “Espai Barra de Ferro”, and learnt the craft of engraving and joined the “Gremi d’Indústries Gràfiques Algueró” in order to update my skills in computer media, a world in constant change in the universe of illustration and graphic design, which I have always been careful not to lose track of.

What I do is crafting, and crafting is learned with practice. And I’m lucky to have worked hard with so many different people, I’ve learned something from each of them. I have been in different design and advertising studios as a graphic designer. I have drawn and illustrated for councils, publishing houses, media, etc. … I have also tried to teach my skills; For more than 10 years I have been working in the school “Escola d’Art Arsenal” in Vilafranca del Penedès, where I currently coordinate the area of printed and audiovisual graphics and teach classes in graphic design and graphic production projects.

I have worked with many entities and companies, but I would like to highlight some of them, either because of how long the collaboration has taken, or because of the synergies we have established. In 2005 I started collaborating with the magazine “Cavall Fort” (the one I used to read as a child when I dreamt of becoming an artist) and I draw the cooking page from the first issue of “Tatano”. I have also worked for “Abadia de Montserrat”, Claret, Teide and Castellnou, among other publishing houses. I have contributed to the communication projects of Badalona City Council, companies in the wine and food sector, MGS Seguros, Aigües de Reus, Cultius Almirall S.L., the College of Physiotherapists of Catalonia and many others. I have carried out projects of all kinds, from corporate identity, signage or packaging, to audiovisuals and multimedia.

Over the years I have participated in various art exhibitions, individual and collective. I have also won several competitions such as “Crema’l tu” (1999) and “Mercè Llimona” (2008) with “La draga sin escates”. I won second prize in the “Arte Micra” competition in 2003 and in the poster competition for “Festa Major de Gràcia” in 2008 and was a finalist in other competitions such as «ASHA» for the animated series «ASHA». In 2001 the UB acquired a collection of my engravings for the Artistic Heritage of the University of Barcelona.

I like to listen to the projects that someone has in mind and try to shape them, to see how the project progresses through dialogue and the exchange of opinions. Having turned my passion into my profession keeps me motivated, from the first to the last stroke that closes the project.

This function has been disabled for Àgata Gil.